Over the past few weeks, you’ve probably heard the news about the EPA’s plans to set carbon pollution standards to reduce carbon emissions from existing power plants.  This is great news!  As part of President Obama’s Climate Action Plan, the EPA is working to develop guidelines for reducing emissions, which individual states will use to design their own programs.

The EPA has opened a period for public comment to “to solicit ideas and input from the public and stakeholders about the best Clean Air Act approaches to reducing carbon pollution from existing power plants”.  Sessions will start with a short introduction and then the floor will be open for public comment.  There is likely to be a list to sign up for a chance to speak upon arrival.  According to the EPA “The feedback from these 11 public listening sessions will play an important role in helping EPA develop smart, cost-effective guidelines that reflect the latest and best information available.  The agency will seek additional public input during the notice and comment period once it issues a proposal by June 2014.”

The schedule includes listening sessions in 11 cities across the country.  The New York and Atlanta sessions have already passed, but there are 9 more happening in the next couple of weeks: 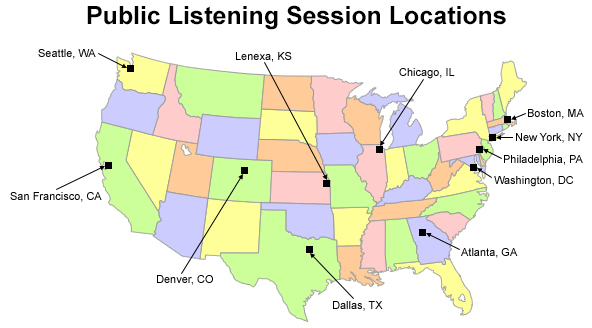 Registration, which can be done online here, is highly recommended.  If you cannot attend one of the sessions, you can submit comments on this EPA webpage or via email to carbonpollutioninput@epa.gov.  Need tips for crafting your input?  This webpage has some useful information to help you understand the issue.